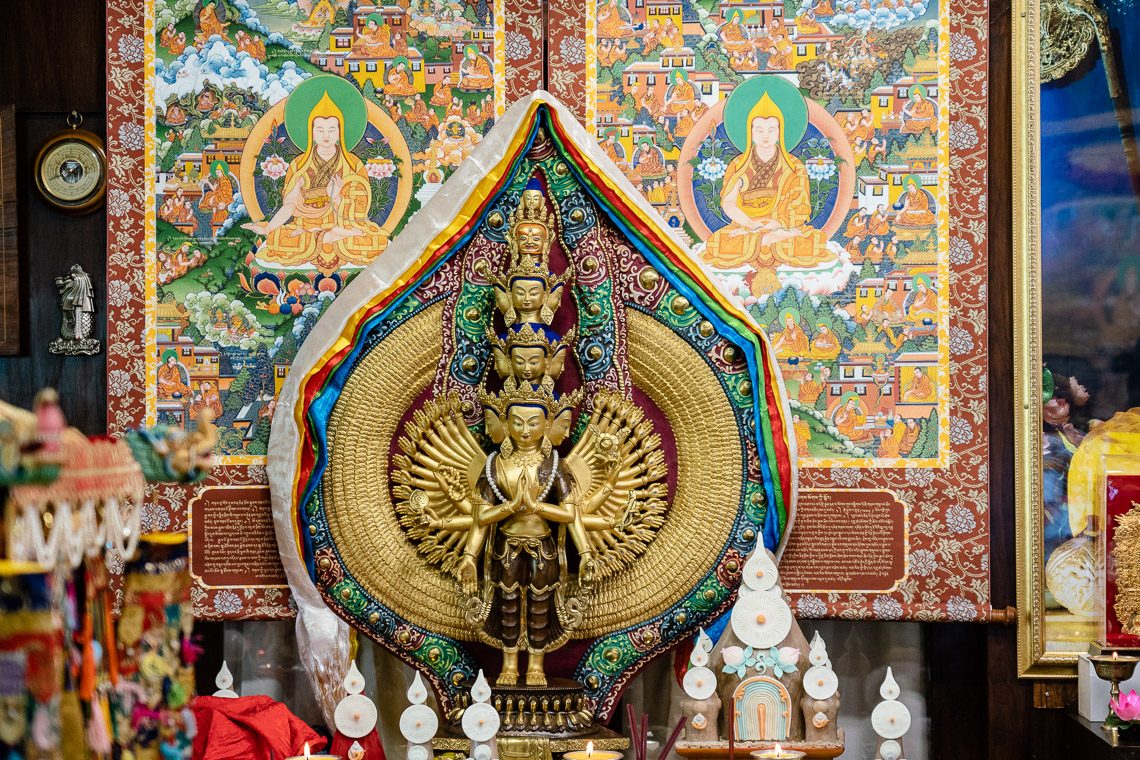 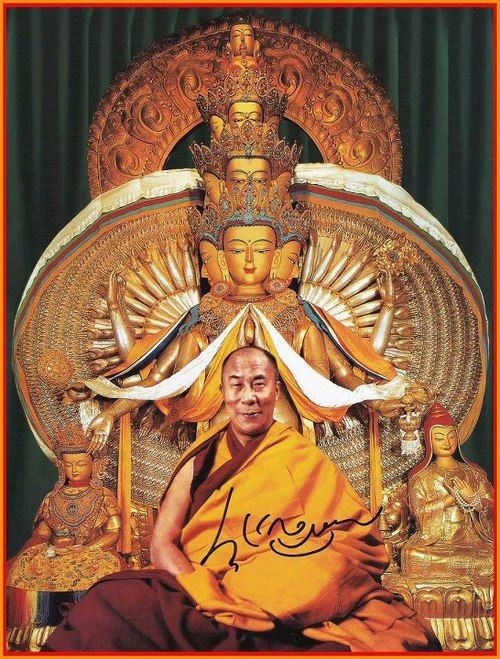 His Holiness the Dalai Lama graciously bestowed two day Avalokiteshvara Empowerment from his residence in Dharamsala, HP, India on May 29-30, 2020. On the first day he gave preliminaries to the empowerment and on the second day the actual empowerment.

Click here to see the video with choice of several languages.

The Self-generation Sadhana of Avalokiteshvara

In the Buddha, the Dharma and the Sangha
I take refuge until enlightenment is reached,
By the merit of generosity and other good deeds,
May I achieve Enlightenment for the sake of all sentient beings. (3x)

Arising in the Holy Body of the Great Compassionate One

Contemplate:
Instantaneously, I arise as the holy body of the Great Compassionate One.

Blessing of the Offerings

Everything is empty. From the sphere of emptiness appear [eight] BHRUMs that become vast and extensive vessels, each containing a white OM. The OMs melt into light and transform into drinking water, water for feet, flowers, incense, lamps, perfume, food and music. Their nature is emptiness, they have the aspect of the individual offerings, and their function is to give special uncontaminated bliss.

Contemplating as follows is (the meditation on) the Ultimate Deity:

The nature of myself, the deity to be meditated upon, and all phenomena are in essence of one taste of emptiness.

2. The Deity of Sound

Contemplating as follows is (the meditation on) the Deity of Sound:

From the sphere of emptiness, the aspect of the tone of the mantra, OM MANI PADME HUM, resounds, pervading the realm of space.

3. The Deity of Syllables

Contemplating as follows is (the meditation on) the Deity of Syllables:

My mind, in the aspect of the undifferentiable suchness of myself and the deity, becomes a moon mandala, upon which the very aspect of the tone of the mantra resounding in space is set down, having the form of written syllables. The sounds and the written letters [of the mantra] are mixing, like very pure mercury adhering to grains of gold.

4. The Deity of Form

Contemplating as follows is (the meditation on) the Deity of Form:

The (syllables) transform into a thousand-petaled lotus, as brilliant as refined gold, marked at the center by the mantra, OM MANI PADME HUM. From the tips of the multicolored light rays emitted from the moon, lotus and mantra, innumerable holy bodies of the Arya (Avalokiteshvara) spread out, pervading all the realms of space. Great clouds of miraculously emanated offerings are beautifully offered to the buddhas and their children.

From yet another great emanated cloud, a continuous rain of nectar descends, extinguishing the fires of suffering of all migrators of the hell and other realms. They are satisfied with bliss (and become Avalokiteshvara). Then the light rays along with the bodies of the deity return and enter into one’s own mind (in the aspect of) the moon mandala, lotus and mantra garland.

They also have long narrow eyes and smiling expressions. Above these is a wrathful black face with bared fangs and wrathful wrinkles, a third eye and orange hair standing upright. On the crown is a peaceful red face with crown protrusion, having a chaste aspect, devoid of ornaments and with (its own) neck.

The first two hands are folded at the heart (and hold a jewel), the second right hand holds a rosary, the third eliminates the hunger and thirst of the hungry ghosts by sending down a stream of nectar from (the mudra of) granting sublime (realizations) and the fourth holds a wheel. The second left hand holds a golden lotus with a stem, the third holds a water vessel and the fourth holds a bow and arrow.

The remaining nine hundred and ninety-two hands, as soft as lotus petals, are (in the mudra of) granting sublime realizations. In the palm of every hand is an eye. The hands do not extend above the crown protrusions or below the knees.

An antelope skin covers the left breast and there is a lower garment of fine cloth. (The waist is) endowed with a golden belt adorned with jewels; (the head of the wrathful face) is beautified with a garland of orange hair. He has a jeweled crown, earrings, necklace, armlets, bracelets and anklets, wears garments of various (colored) silks and radiates rays of white light.

5. The Deity of Mudra

Contemplating as follows is (the meditation on) the Deity of Mudra:

At the crown of the (central) head is a white OM, at the throat, a red AH, and at the heart, a blue HUM. Upon a moon disc at the heart is a white (syllable) HRIH, with a long vowel (i) and subsequent aspiration (h).

[Then, say the following (mantra five times while) touching and blessing the heart, brow, throat and the tops of the (right and left) shoulders with (one’s hands in) the commitment mudra of the lotus family, which was demonstrated before. This is the Deity of Mudra.]

Invocation and Absorption of the Wisdom Beings

Then, invoke the wisdom beings saying:

Light rays radiate from the HRIH at one’s heart, invoking from their natural abode Arya Avalokiteshvara, surrounded by the entire assembly of buddhas and bodhisattvas.

Contemplate:
They become non-dual with (oneself), the commitment being.

Invocation of the Dhyani Buddhas and Offerings

Again, light rays radiate from the HRIH at one’s heart, invoking the empowering deities: the five (Buddha) families, with Amitabha as their principal deity, together with their retinues.

“All Tathagatas, please bestow empowerment upon me.”

Requested thus, the Goddess Dressed in White and the others who are emitted from the (tathagatas’) hearts hold aloft vases filled with nectar and say:

“Just as at the very time of birth,
The devas offered ablution (to the Buddha),
I, too, with pure divine water,
Offer ablution to the holy body.”

Thereby, the entire body is filled [with divine water] and all defilements are purified. From a transformation of the excess water remaining on the crown, the head becomes adorned with Amitabha—the very nature of one’s guru—on the crown, Akshobhya on the forehead, Ratnasambhava behind the right ear, Vairochana at the back, and Amoghasiddhi behind the left ear.

On the moon disc at one’s heart is the exalted wisdom being, Arya Avalokiteshvara, with a white-colored holy body, one face and two hands. The right (hand is in the mudra of) bestowing sublime realizations and the left holds a lotus (at his heart). The moon disc at his heart is marked by the concentration being symbolized by the white (syllable) HRIH, with a long vowel (i) and subsequent aspiration (h).

[Having focused upon oneself, clearly visualize the holy body of the deity, then meditate one-pointedly upon it is called meditation on the Deity of Sign.]

Offerings to the Self-Generation

Then (perform) the offerings of the self-generation. Cleanse (the offering substances of) hindrances by means of the (action) mantra along with visualization:

(The offering substances) become just empty. From the sphere of emptiness, from (eight) BHRUM (syllables), eight vast and extensive precious vessels arise. Within each, (the syllable) OM melts into light from which arise drinking water, water for feet, flowers, incense, lamps, perfume, food and music. They are empty in nature, have the aspects of the individual types (of offerings) and function to bestow special uncontaminated bliss.

Present the offerings by (reciting the following while making the appropriate mudras):

[If you would like to do them extensively, the offerings can also be made (while reciting) offering garland verses along with the mantras (as is done while presenting offerings to the front generation.]

Highly venerated by all the Buddhas,
You accumulated all holy qualities, and
Were conferred the name Avalokiteshvara:
I prostrate to the always merciful one.

[Then, with regard to doing the (mantra) recitation, bless the counting rosary. With palms joined at one’s heart, pay homage to the guru and deity saying]:

[Then put a properly assembled rosary that conforms to the activity to be done (i.e. a crystal or bodhi seed rosary for peaceful actions) between your cupped hands and bless it by reciting (the following mantra) seven times]:

Contemplate as follows:
On a moon disc at one’s heart is the concentration being (the syllable HRIH), surrounded by garlands of the mantras to be recited, white in color and standing clockwise. Light rays radiate from them filling all the inside of one’s body and purifying all negativities and obscurations.

Light rays radiate outwards from which an incalculable assembly of deities of the Great Compassionate One are emitted, purifying the negativities and obscurations of all sentient beings and setting them in the state of the Arya (Avalokiteshvara). (These then) collect back and dissolve into the HRIH syllable at one’s heart.

[Then, recite the hundred-syllable (mantra of Padmasattva) three times, and make amends for excesses and omissions (in one’s practice), and stabilize the blessing.]

Request to Reside or to Depart

Please remain here together with this image
For the welfare of migrating beings and
Excellently bestow health, long life, riches,
And supreme (realizations).

OM. You enacted all aims of sentient beings
And bestowed appropriate attainments.
Although you depart to the buddhafield,
Please return again later.

The exalted wisdom beings depart to the natural abode (the sphere of emptiness). The supporting and supported commitment beings [which are] the mandala itself and visualized deities melt into light and dissolve into me.

I transform into the Great Compassionate One, with one face and two arms, marked by a white OM on the crown, a red AH at the throat and a blue HUM at the heart.

Due to these merits, may I quickly
Become the Great Compassionate One
And place all migrating beings, without exception,
In that very state.

Long Life Prayer for His Holiness the Dalai Lama

In this realm surrounded by snow mountains,
You are the source of all benefits and happiness,
Tenzin Gyatso, you who are one with Avalokiteshvara,
May you remain steadfast until the end of cyclic existence.

(Adapted from the Sadhana composed by the Seventh Dalai Lama, Gyalwa Kalsang Gyatso. Transmission bestowed by His Holiness the Fourteenth Dalai Lama on several occasions.)